This CIA declassified document concerning OSS activities was recovered from the internet archive. It document was declassified in 2004.

This document is titled: Request for MO Doctrine

The OSS Planning Group in its meeting Monday, May 31, discussed the desirability of the preparation by the MO Branch of basic doctrine for MO operations. … The Planning Group also suggested that the preparation of such doctrine by the MO staff should be done in close liaison with the Psychological Warfare Staff, which it is believed has already done some work on such a project.

Onthank wants Healy to provide him with a basic doctrine of MO operations, which he did, as contained in these other OSS documents –

Other Images and People.

Onthank is already covered in this OSS document.

An online tribute to his wife, Julia Davis, cites that Charles was a lawyer at Columbia University in 1951. (he died in 1957)

WT: You married Charles Healy in 1951, and you were married in your father’s apartment in New York City. How did the two of you meet?
JD: Well, he was a good friend of my second husband, and they were both in the CIA during the war, or what became the CIA. It was the OSS. But he stayed in Washington and my husband went abroad. I wasn’t in Washington when he was. When I was there I was there with my husband and I was never in Washington alone. I didn’t get to know him there. But then when my husband came back we visited back and forth as couples. Then our respective marriages broke up and we found that we liked each other very well so we got married.
WT: And he was working at Columbia?
JD: At that time, yes.
WT: What was he doing there?
JD: He was a lawyer and he was in charge of wills and bequests.

Her second husband was Colonel Paul West, an assistant to Henry Luce at Time and Life, and he is listed in the OSS Personnel database. Pictured at his wedding to Julia Davis –

For those who don’t know – OCR stands for Optical Character Recognition and when that is done on images, it makes it so you can search the images for certain words or phrases that you are looking for.

Here is an OCR’d PDF file of all the pages of this document.

Following are the individual images of the document, for those who prefer to look at them that way. 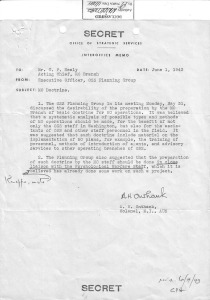