This CIA declassified document concerning OSS activities was recovered from the internet archive. It document was declassified in 2004.

This document is titled: Atabrine as a Weapon of Psychological Warfare

Basically this document is discussing the fact that Japan controls most of the quinine-producing areas, and how the Germans are taking advantage of this by selling Atabrine in the Levant, or else a lot of people will die. Onthank feels this is a method of psychological warfare, and wants help getting increased production of Atabrine by the U.S. to counter this move by the Germans.

Other Images and People.

Onthank is the only OSS person mentioned. He is already covered in this OSS document.

For those who don’t know – OCR stands for Optical Character Recognition and when that is done on images, it makes it so you can search the images for certain words or phrases that you are looking for.

Here is an OCR’d PDF file of all the pages of this document.

Following are the individual images of the document, for those who prefer to look at them that way. 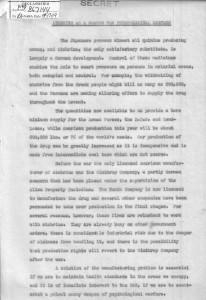